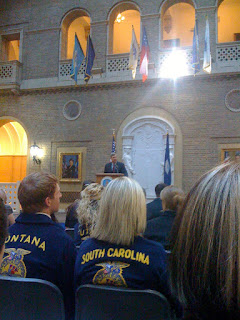 More than anywhere else in the country, rural America provides tremendous opportunities for youth to make a difference. That's what U.S. Agriculture Secretary Tom Vilsack told more than 150 students and agriculture professionals gathered at the USDA this morning to kick-off AgDay celebrations in the nation's capitol.


In his remarks, Secretary Vilsack noted that despite their extraordinary efforts through history and today, American farmers and ranchers receive little credit, like an Oscar or Olympic gold medal, for their efforts in producing the world's food supply. In noting these efforts, Vilsack noted that in 1950, the average farmer fed only 20 people. Today, each American farmer and rancher feeds more than 150 people, and they have assumed much greater responsibility for generating food for the world while often having to rely on off-farm income to survive economically on the farm.

To protect the viability of the 21st Century farm, Vilsack says the USDA must expand its focus to address more of the struggles faced in rural America. Some of the areas of focus include: