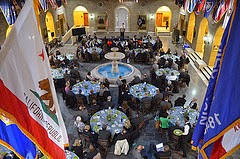 The USDA Whitten Building Patio was decked out on March 25, 2014, for the annual Celebration of Agriculture Dinner. Nearly 175 people were seated for a delicious dinner featuring pork provided by the National Pork Producers Council and prepared by the esteemed Mark Salter of Robert Morris Inn.

Dr. Borlaug developed high-yield, disease-resistant wheat varieties that greatly increased food security for Mexico, Pakistan and India. He is known as “the father of the Green Revolution,” and won the Nobel Peace Prize in 1970 for his research and contributions to agriculture.

The 2014 written and video essay contest winners were also both recognized during the dinner. This year’s essay theme was “American Agriculture: 365 Sunrises and 7 Billion Mouths to Feed.” The winner of the written essay contest was Clara Knipp from Tipton, Mo. Brackston McKnight from Jacksonville, Texas, won the video essay contest.

Lindsay McQueen, Union/Jackson County, Ill. Farm Bureaus, accepted the Charles Eastin Award during the dinner. This prestigious honor recognizes individuals who stand out as advocates for accurate communication between rural and urban audiences.

This festive evening was a fitting and lively tribute to the importance of American agriculture and its vibrant future. 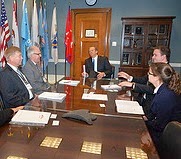 Nearly 100 students representing 4-H, AFA, FFA and Student NAMA convened in our nation’s capitol to share the message of American agriculture with legislators.

After a day of message training, students took advantage of opportunities to meet face to face with Congressional leaders from their home states and share their views and aspirations.

The student delegates also enjoyed a tour of Washington, D.C., and an exclusive screening of the documentary, "FARMLAND—The Education of a Tradition."
Posted by National Ag Day at 11:06 AM 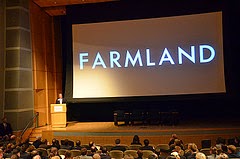 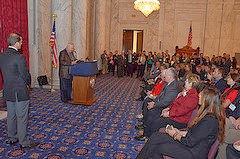 After more than 100 student delegates visited Congressional leaders and discussed the importance of American agriculture, they joined their colleagues in the Russell Caucus Room for the Ag Day Mix & Mingle Luncheon.

Orion Samuelson, WGN Radio, emceed the event at which the Outstanding Young Farmer award winners were recognized and U.S. Senator John Boozman (R-AR) spoke to luncheon guests about the remarkable contributions of American agriculture to our nation’s economy and culture.