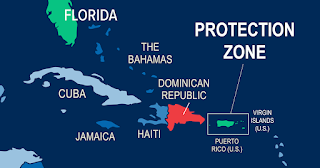 NPPC worked with USDA and the World Health Organization for Animal Health (OIE) to recognize the islands of Puerto Rico and the U.S. Virgin Islands as a “protection zone” which would allow the United States to maintain its current animal health status.

A foreign animal disease (FAD) in this country would wreak havoc on the livestock industry — killing animals, cutting production, increasing food prices and costing jobs. That’s why the organizations that represent the various species have worked so hard to keep FADs at bay. This year on Ag Day, the pork industry would like to shine a light on efforts pork producers have prepared to respond to a FAD, helping keep the U.S. pork industry free of African Swine Fever (ASF).

But they haven’t done it alone. In its ongoing efforts to prevent and prepare for an outbreak of ASF, the U.S. pork industry has collaborated with federal agencies, a public-private partnership critical to winning a fight against any FAD.

Pork producers’ concerns about ASF had been rising even before the pig-only disease began spreading through China in 2018. Fears were heightened last summer with the detection of the highly transmissible disease — which is no threat to human health or food safety — in the Dominican Republic and Haiti, the first time in 40 years ASF had been in the Western Hemisphere.

When ASF was confirmed on the island of Hispaniola, just 750 miles from the U.S. mainland, the pork industry prompted the U.S. Department of Agriculture (USDA) to move quickly to isolate it. The agency provided the Dominican Republic and Haiti with testing support, laboratory equipment, training laboratory personnel, personal protective equipment, and aid for response and mitigation measures.

USDA also asked the World Organization for Animal Health (OIE) to recognize the neighboring islands of Puerto Rico and the U.S. Virgin Islands as a “protection zone.” The OIE designation allows the United States to maintain its current animal health status and, as an ASF-free country, continue exporting pork should an ASF case be detected in either U.S. territory.

Most importantly, the pork industry encouraged USDA to provide $500 million for keeping ASF out of the United States, an unprecedented move in terms of the amount dedicated to one animal disease and getting the funds upfront — before it gets to the U.S. shores.

In addition to USDA, the pork industry is working with the Department of Homeland Security’s U.S. Customs and Border Protection (CPB) to stop the spread of ASF, getting CBP to increase efforts to intercept illegal boat traffic from Hispaniola to Puerto Rico and the U.S. Virgin Islands and to conduct thorough inspections at all U.S. borders and ports of entry.

While USDA and CBP put practices into action, the National Pork Producers Council — representing America’s 60,000 pork producers — asked Congress for funding to help those agencies do their jobs, convincing lawmakers to approve $635 million in emergency funding for USDA’s Agricultural Quarantine Inspection program, including for 720 new CBP agricultural inspectors. Congress also provided $30 million for the National Animal Health Laboratory Network, which provides disease surveillance and diagnostic support, and $20 million for USDA’s Animal and Plant Health Inspection Service to hire more staff for its Veterinary Services, which would handle controlling, depopulating and disposing of animals if there were an ASF outbreak in the United States.

That collaboration has helped keep the U.S. pork industry free of ASF and has better prepared pork producers and government officials to respond to any FAD.