We Care: It's Our Job
by Georgia Miller, Communications Intern, NPPC 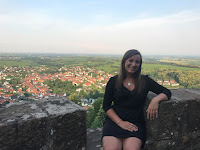 Centuries ago, when technology spanned no further than the wheel and shovel, the first farmers and ranchers raised their animals according to their own rules. There was no manual or book, save the farmer’s almanac, to guide them along their way. They relied upon one another to learn new things and to hold themselves accountable for the advancement of production practices. Every farm was different, but a common instinct drove all successful farmers: your livelihood depended on the responsible use of your land and the proper care of your animals.

These instincts haven’t left us, but consumer trust and understanding of food production has diminished as new generations are growing more and more distant from agriculture. Although our food is safer, better-tasting and more sustainable than ever before, many consumers aren’t convinced. By 2050, there will be 10 billion mouths to feed, making technological innovation, production efficiency, and safety more important than ever. If we are to successfully address this challenge, we must find new ways to educate consumers about the technology and innovation that will be key in meeting the world’s food needs and expectations for ever-more sustainable production systems.

Gene editing in livestock, for example, is an emerging technology that can accelerates genetic improvements that could be realized over long periods of time through breeding. It allows for simple changes in a pig’s native genetic structure without introducing genes from another species. The National Pork Producers Council (NPPC) is a advocate for the development of this technology because it has the potential to eliminate animal diseases, such as Porcine Reproductive and Respiratory Syndrome, that cause animal suffering while decreasing the need to use antibiotics in pork production and reducing pork production’s environmental footprint.

The promise of technologies like gene editing won’t be realized if we don’t reduce the gap between the pace of innovation and consumer understanding of modern food production.

That’s why NPPC and the National Pork Board created We Care℠, an initiative designed to promote responsible practices in all areas of production while meeting consumer expectations for transparency at the local, state, national, and international levels. The We Care commitment has allowed U.S. pork to use nearly 76 percent less land, more than 25 percent less water and seven percent less energy since 1960. It is this same commitment that drives our support of gene editing and other technologies that allow us to build on our track record of success.

While nearly everything about farming has changed in the last 200 hundred years, one thing has always stayed the same: when it comes to our animals and our land, We Care. It’s our job.


Raised on a third-generation swine and grain farm, Georgia Miller realized her love for agriculture at a very young age. She is from Niantic, Illinois, where her family has raised purebred Berkshire hogs for more than 50 years. Currently, Georgia is a student at Iowa State University studying Agricultural Education and Agriculture in Society. At NPPC, she is taking that passion to new heights by expanding her knowledge of public policy and agricultural issues to become a stronger, more diverse advocate for the industry she loves so much.
Posted by National Ag Day at 6:00 AM